Experiencing loneliness as a Black, or minority ethnicity, person

This week’s guest blog is from Olivia Field, Policy and Engagement Manager for the British Red Cross and Co-op partnership that seeks to tackle loneliness and social isolation across the UK. They recently published  Barriers to Belonging: An exploration of loneliness among people from Black, Asian and Minority Ethnic (BAME) backgrounds.

We know from the Office for National Statistics that 5% of adults in England report feeling lonely “often” or “always”. We also know feeling this way can have negative effects on your health, wellbeing and productivity.

But we don’t yet know how these experiences differ according to ethnicity. Without a more nuanced understanding of loneliness, we risk creating solutions that fail to cater to all of society.

Unpicking the experiences of people with BAME heritage

Determined to rectify this, British Red Cross and Co-op worked with researchers at the University of Sheffield and the Runnymede Trust to start to unpick the particular experiences of loneliness among people from Black, Asian and Minority Ethnic (BAME) backgrounds –  what we’ve found should have far-reaching implications.

Barriers to Belonging draws on a survey of almost 1,000 respondents (of which 69% reported being from a BAME background) as well as in-depth interviews and focus groups with more than 60 people from both BAME and White British backgrounds who were experiencing loneliness, and an additional 40 interviews with service providers.

The findings confirm that being treated with less respect because of ethnicity, religion, and ‘being a migrant’ also increased people’s likelihood of feeling always or often lonely. 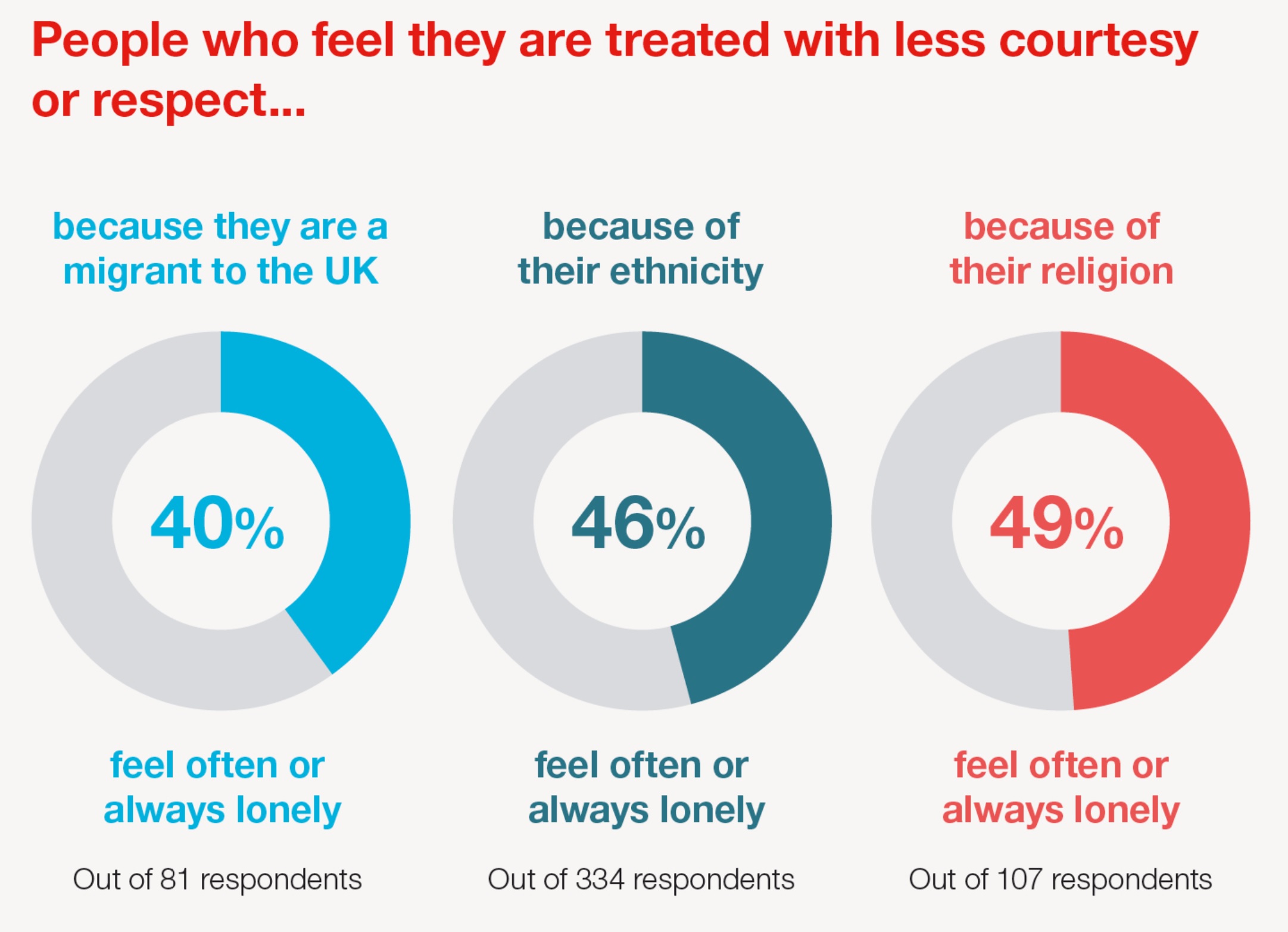 A sense of belonging protects people from feeling always or often lonely – 67% of survey respondents who felt they didn’t belong to their community said they were ‘always or ’often’ lonely, compared to just 16% who felt they did belong. 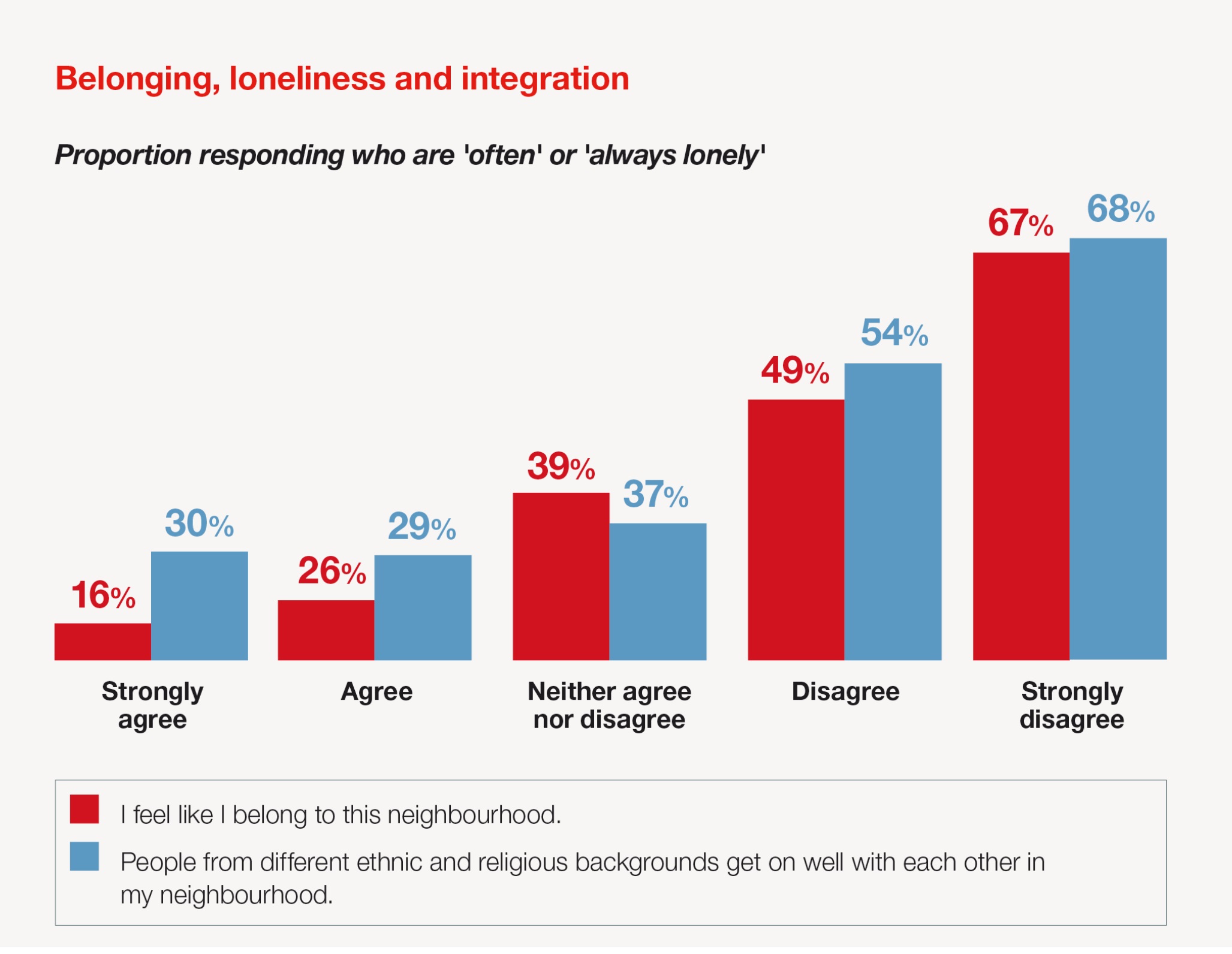 Meaningfully connecting to the people and places around us and feeling accepted, safe and included helps us feel as though we belong. Yet feeling unsafe, unwelcome or fearful of hostile encounters in the workplace, services and neighbourhoods disproportionately affects non-white British people.

The research found people from BAME backgrounds are more at risk of experiencing certain factors that cause loneliness, and often face greater barriers accessing help to overcome it. We found the following.

These studies shine a spotlight on additional triggers of loneliness that have, to date, largely been overlooked, such as racism, discrimination and xenophobia.

While all ethnic groups encounter barriers to accessing help, we found these can often be magnified for non-white British groups:

What can we do?

Barriers to Belonging puts forward a series of recommendations for national policymakers, local authorities and service providers to ensure people experiencing loneliness get the help they need, no matter their background. These fall into four categories:

Policy and Engagement Manager for the British Red Cross

How can we reduce the toll of loneliness in older adults?