Uncertainty appears to be the new normal when it comes to politics. The traditional lenses we use to examine public attitudes and behaviour, like income and GDP or healthy life expectancy, are still part of the mix. But it is wellbeing concepts that give us a really useful vocabulary to talk about the incredible changes we’re seeing in attitudes at a local and national level.

The most important early observations from a wellbeing perspective are:

1. Governance, specifically trust in the delivery of public services, matters. This is something that’s relevant all the time, not just at elections. Governance is often overlooked when it comes to it’s effect on our wellbeing, compared to other things like health, personal finance or relationships. However, it’s now coming to the forefront as we try to better understand what voting behaviour is telling us about people’s lived experiences.

Using the World Bank indicators, analysis shows that what ranks highest in importance for people are ‘effectiveness of government services and efficiency of government and policy delivery’. This is particularly important at lower GDP levels, but still holds true in richer countries.

The European Social Survey suggests that once a country reaches a good level of GDP, other governance factors become important, particularly ‘voice and accountability’, ‘political stability and absence of violence and terrorism’.

The evidence shows that when people are satisfied with the way they are governed, wellbeing is higher and more equal. Political stability bucks this trend, presumably because the longer a government remains in power, the more people feel that their interests and opinions are not being taken into account.

In the UK we have seen a decline in views of  government effectiveness since 2004. There have also been sharp changes in voice, accountability and political stability between 2002 and 2006. 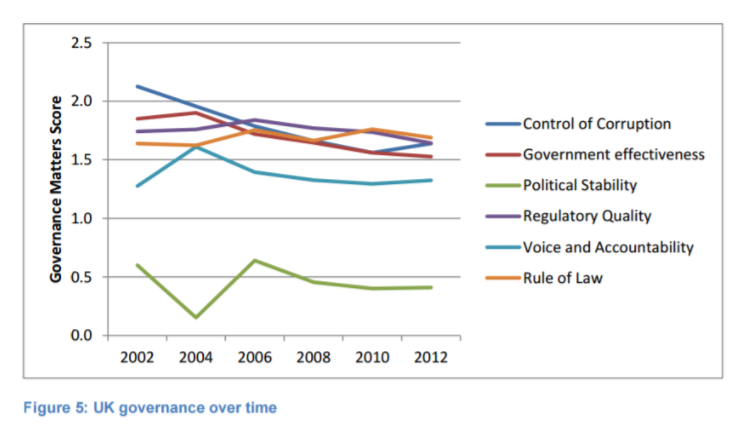 The last factor cited in the survey – ‘absence of violence and terrorism’ – has taken on new relevance following the three terrorist attacks that happened in Manchester and London during the election campaign. Hopefully more analysis will be carried out to fully understand its exact impact, but it certainly created an unprecedented context in which people cast their votes.

2. Being seen and heard matters. The European Social Survey suggests that two conditions affect our perceived satisfaction with society: unemployment levels and ‘perceived quality of society and societal wellbeing’, which includes things like quality of public services and feeling listened to.

We’ve seen high employment in the UK, and arguably this has cushioned the UK from the wellbeing impacts of the financial crisis. But  many clearly “feel more acutely that their interests and opinion are not being taken into account.” We can see that the financial crisis recovery didn’t reach everyone.

Additionally, the strength of our social fabric gives countries resilience and there are additional wellbeing benefits when a country’s strong social relations can help them weather crises. An interesting example is Iceland.

3. Wellbeing, and wellbeing inequality, can tell us more of the real story than income and political voting records alone when it comes to the mood of the country, or any given area. It was the an important indicator, for example, of how different regions voted in the EU Referendum.

It would be interesting to see more analysis at a constituency level before drawing too many specific conclusions. However, it’s an exciting time to be in the midst of a new way of measuring and understanding what really matters to people – which is all wellbeing really is about.

We already know, from research carried out by our evidence team at the London School of Economics, that when average wellbeing drops, an incumbent government is more likely to be booted out. When it rises, this has little effect on voting patterns. We can see that average national wellbeing rose between 2011 and 2015, and then levelled off in 2016, and we’re left with tantalising questions about its relationship to our current hung parliament.

The election raises important issues for our Centre. The changing world of work, how people view their public services, social trust are just some of the elements that are shifting the balance of politics as usual. We need to keep working to understand what it means to be human and what matters to us most.

We must focus our collective efforts on creating the conditions to improve our wellbeing. This means:

These problems can’t be solved by government, business or charities alone. New types of collaboration are needed. This is what we aim to achieve as a collaborating centre at the What Works Centre for Wellbeing. And we’re looking forward to sharing new evidence over the coming months that will help policymakers and practitioners make better decisions to improve people’s lives.

How leaders value quality of life in their organisations