Last month, The Children’s Society launched the latest edition of its annual Good Childhood Report, which present the latest trends and insights into children’s subjective well-being. This research programme, set up in 2005 in partnership with the University of York, aims to fill a gap in the research about how life is going from the perspective of children themselves and for the full range of well-being domains that are important to children.

This year’s report, updates the previous time series analyses of children’s subjective well-being with the latest available data from Understanding Society, and considers different explanations for some of the gender patterns that have emerged in these trends over time.

The Office for National Statistics publishes the Children’s Measures of National Well-being which draws on data from a range of sources including The Children’s Society. Analyses from the ONS children’s well-being measures provide additional context to the findings published in the Good Childhood Report.

Successive Good Childhood Reports have drawn on the latest available data from Understanding Society to present trends in children’s subjective well-being from 2009/10 onwards. Children’s happiness with their life as a whole and relationships with friends is at its lowest point since 2009/10, driven by a trend of girls becoming increasingly unhappy with these aspects of life over time. There is also a long-standing gender difference in happiness with appearance that has been growing since 2002.

Gender differences in satisfaction with appearance, 2000 to 2015 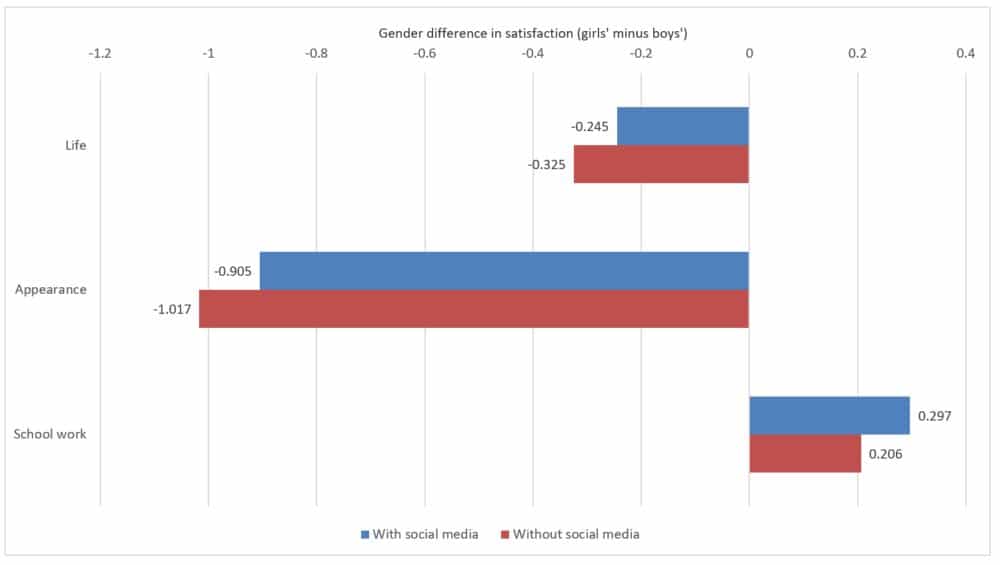 Furthermore, The Children’s Society’s analyses suggest that children with low intensity (less than an hour on a normal school day) social media usage do not have lower levels of well-being than those who do not use social media at all, and low intensity usage appears to have some benefits in terms of happiness with friendships.
Research from both the Children’s Society and the ONS has shown that family support and relationships with parents are amongst the most important factors associated with well-being of children.

Social media usage and feelings of support by family
Using data from the Understanding Society survey, our analyses found that children who use social media heavily are far less likely to say that they feel supported by their family in most or all things they do and more likely to say they do not feel supported by their family in the things they do compared with medium, light and non-users of social media.

Talking to parents about things that matter by time spent on social media, 2013 to 2014 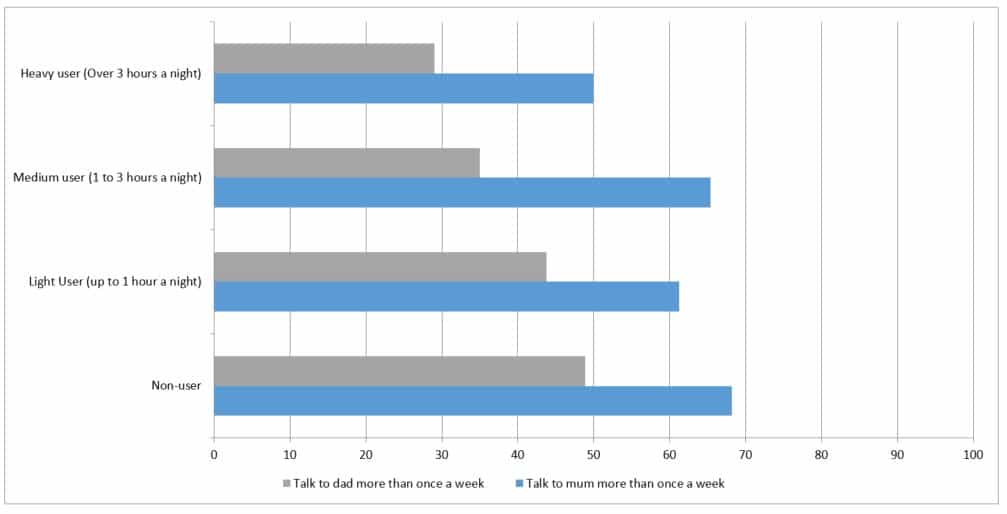 However, it is important to note that these analyses should be interpreted with caution because family composition hasn’t been taken into account. For example all children are asked this question irrespective of whether they live with both parents. It would be necessary to carry out further analyses to fully understand the impact of lone parent families on the parent-child relationships.

Initial analysis by ONS suggests that higher social media use is associated with less discussion with parents about things that matter. Based on this early analysis, we cannot yet say whether higher internet usage could be crowding out more personal interaction in families, or whether children in households with less family interaction tend to use social media more and as such, further research is needed in this area.

As part of the on-going programme of work on children’s well-being, ONS will be consulting in Autumn 2017 on the existing framework of measures, including how appropriate or relevant the measures are and how our data is being used. If you would like to get involved with the consultation please get touch: qualityoflife@ons.gov.uk