Home > Blog > How does UK wellbeing compare to other countries?

How does UK wellbeing compare to other countries?

This week the ONS published a comparative look at how the UK, as a whole, is doing. They compared it against the performance of other countries in the European Union and the Organisation for Economic Co-operation and Development (OECD). They look at measures of personal wellbeing, relationships and health, as well as civic engagement and trust in civic institutions. The data comes from a variety of European, OECD and global datasets. Our Head of Evidence, Deborah Hardoon, digs into the data.

How is the UK doing?

In comparison with economically and socially comparable countries this data suggests that, on average, we are doing ok. 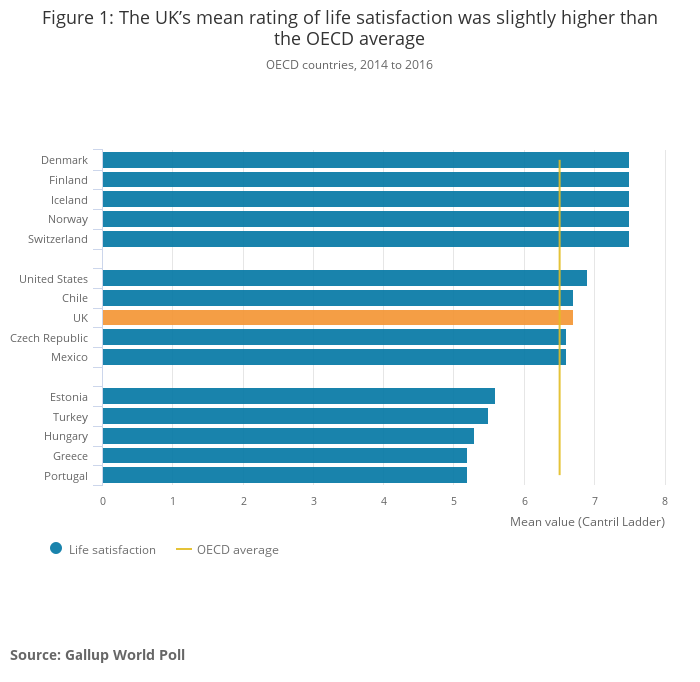 An important aspect of wellbeing, both at the individual level, and at the community level, is the quality of our relationships. For the majority of people in the UK, it would seem like we are doing ok in this regard too. The vast majority of us, 93% said that if we were in trouble, we had a relative or friends to count on. This is higher than the OECD average of 89%.

On reading the numbers in the release in more detail – here are my three main takeaways:

While we are happy that most of us are doing ok, it’s also important to look beyond the headline result and focus on the 7% of people in the UK that said that if they were in trouble, they wouldn’t have anyone to count on.

Five percent of the UK population reported that they felt lonely most or all of the time. That’s more than three million people. This is a proportion that while consistent with the EU average is something that we are rightly not complacent about in the UK. Similarly, 14.1% of households struggling to make ends meet is below the EU average of 21.6%, but still means that one in every seven households is struggling day to day.

What’s more, this data is based on household survey data, so misses people that are not covered by this survey method – including people in homeless hostels, care homes, barracks or prisons.

It seems that regardless of the indicator, the Scandinavian countries are most likely to top the charts – leaving Greece near the bottom. The UK tends to sit near the average or a little above, across the board. This ordering is consistent with the position of countries in the World Happiness Report, the next edition of which is to be published next week, which provides a single ranking of how countries compare with each other in terms of subjective wellbeing.

The consistency in the performance of different countries emphasises the aspects of wellbeing that complement each other:

We can find lots of other indicators and indexes which measure various other aspects of life and society where the same country patterns emerge – from perceptions of corruption, to gender inequality. The proliferation of composite indices, here, here and of course here, demonstrates how well we recognise now the importance of how all these different indicators work together and how universally important these measures are to people all over the world.

But at the same time, a good performance on one indicator cannot compensate for a poor performance on another, as each measure is important in and of itself – particularly at the individual level. Looking for outliers thus helps us understand where to focus. It is therefore surprising and instructive that in Finland, an otherwise very happy country – only 54% of people reported feeling close to others in the area where they live, fewer than the EU average of 63%. Norway has the highest prevalence of anxiety disorders.

Objective measures of wellbeing help us understand specific challenges, where we would want to target measurable improvements – such as improving life expectancy or reducing poverty.

Subjective wellbeing measures that ask people directly how they feel about their life and their happiness allow us to capture things which affect people that you would miss from standard objective measures of living standards, while at the same time effectively asking people to summarise and weight the collective impact of all the socio-economic and environmental variables that we can measure. Understanding the relationship between these objective and subjective measures is important.

This release includes data on people’s top concerns – effectively asking people to provide a weight for different issues. In Spring 2018, the top three concerns were health and social security, housing and the cost of living – all much bigger concerns for people in the UK than the EU-28 average. This is despite the fact that release also includes data which finds that healthy life expectancy in the UK is growing and that the UK performs better than the UK average on satisfaction with accommodation and the proportion of households struggling to make ends meet. Indeed, the release states that:

“Despite increases in estimated health-adjusted life expectancy at birth of males and females in the UK (between 2000 and 2016), there has been a decrease in self-reported health in the UK since 2010, suggesting that more people in the UK are believing themselves to be in worse health despite the fact that World Health Organisation (WHO) estimates showed we were living longer, healthier lives on average over this period.”

It is therefore vital that we recognise subjective views, fears, discontent and unhappiness on top of the objective measures. This helps to identify the issues of most importance to people and inform policy and practice to address those concerns in a balanced and evidence informed way. Subjective perspectives matter – people’s biggest concern in the Spring 2016 data was immigration, and that subjective concern had an important impact on the EU referendum result and associated current national situation.

Deborah leads the centre’s research, heads a team with evaluation and analytical expertise and is responsible for the centre’s evidence approach and standards. An economist by background, she was previously Deputy Head of Research at Oxfam GB, and Research Manager at Transparency International, responsible for the global corruption measurement tools, including the Corruption Perceptions Index.

Putting kindness at the heart of community planning