Home > Blog > How has Covid-19 affected wellbeing across the world?

How has Covid-19 affected wellbeing across the world?

From the Centre: This research provides a snapshot of some people’s Covid-19 related experiences, but is not representative of the general population. The survey sample included 3,000 people from 97 diverse countries that experienced different levels of infection and policy responses. People were voluntarily recruited to answer the survey by the Happiness Institute through their existing network and audience. Respondents were predominantly female (83%) and mostly between the ages of 25-34 (32%) and 35- 44 (25%)

To understand how the Covid-19 pandemic has impacted subjective wellbeing, the Happiness Research Institute recently published a report ‘Wellbeing in the age of Covid-19’ summarising findings of a longitudinal study of 3,211 people that were surveyed up to six times between April to July 2020.

As several large-scale studies in the UK, Germany, and Canada have shown, the pandemic has clearly affected life satisfaction. Eurofound data shows that average life satisfaction has significantly dropped across European countries, in some cases as much as 17%, which is equivalent of the wellbeing effect of being diagnosed with depression.

With this in mind, the intention of our report was to provide deeper insight into how subjective wellbeing evolved throughout the first phase of the pandemic. By regularly asking our respondents about their weekly emotions, loneliness, worries and behavioural changes, we were able to highlight some of the most important dynamics affecting evaluative, affective, and eudaimonic wellbeing.

Using OLS regression analysis, we confirmed that the number of COVID-19 cases within a given country is strongly associated with negative emotions. Most striking was the impact of case increases on anxiety. For a given population of one million, only 100 new COVID-19 cases would lead to 7200 more people becoming anxious. On the other hand, life satisfaction and eudaemonia were relatively less affected by rising COVID-19 cases. 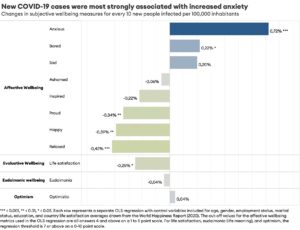 Cohabitation did not necessarily protect against loneliness

Similar to What Works Wellbeing’s study on loneliness, we found that groups that were particularly vulnerable to isolation before Covid-19, were most likely to report high levels of loneliness after the pandemic began to take root. Young people, and those without jobs or partners were found to be the loneliest. 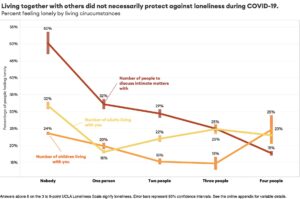 Encouragingly, many of the common activities that respondents took up during lockdown seemed to have the largest positive impact on life satisfaction. Our data suggests that, at least at first, people adapted relatively well to the constraints that were placed upon them.

The figure below shows the life satisfaction impact of increasing an activity during the pandemic. For example, spending at least 15 minutes outside for one more day per week was associated with a 0.054-point increase in life satisfaction on a 0 to 10-point scale. Calling with loved ones and exercising also had significant impacts on subjective wellbeing and were quite common within our sample population. 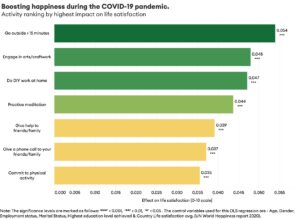 As we continue to face the Covid-19 pandemic, it is important for policymakers to learn from evidence-based studies on the pandemic’s wellbeing impact and to pay closer attention to our mental as well as our physical health.

Look at our work on Covid-19 and wellbeing inequalities

Alexander Gamerdinger is an analyst at The Happiness Research Institute and one of the principal authors of the Report: Wellbeing in the age of COVID-19.

A public health approach for a wellbeing-centred recovery

How can we protect the wellbeing of those most affected by Covid-19?

Loneliness in the time of social distancing

Teenagers’ experiences of life in lockdown

Wellbeing at the heart of Covid recovery

What helped people and communities cope during Covid?

Look at our work on Covid-19 and wellbeing inequalities