Music-making to improve wellbeing for people recovering from substance misuse

In 2014 Channel 4 broadcast a one-off documentary that brought together 10 people with drug or alcohol addictions and associated conditions such as panic attacks, anxiety and severe depression. They had varying musical experience and abilities and the programme tracked the positive effects of working together for two months, playing and composing, and then performing their composition with the London Symphony Orchestra.

The Addicts’ Symphony initiative had an 80% success rate in helping the musicians stay clean and sober.

Individual testimonies from the participants confirmed the positive effects of the experience:

“Playing in Addicts Symphony was fundamental to my recovery. After coming out of rehab I needed a purpose. Playing alongside the other addicts was a big reason for taking part. This was a safe environment.” New Note participant

“Writing together, performing together, it just helps you to feel connected and like you are not battling on your own.” New Note participant

The Addicts’ Symphony demonstrated that a structured musical environment can have transformative effects upon its members, and we were keen to take these insights into related initiatives.

New Note Projects, launched in April 2015, uses music to help socially excluded people reconnect and rebuild their lives.
The projects are primarily for people who are in recovery from addiction but they also include people who are vulnerably housed and have other mental health issues.

In October 2015 the New Note Orchestra was launched, a Brighton-based group of people recovering from alcohol and substance misuse, and they worked towards a public performance of a collectively composed piece. This wasn’t restricted by musical genre, and there was an eclectic mix of instruments on the go. So our first New Note cycle had an added creativity to it, producing a sort of blend of experimental classical music and rock. It also included beginners as well as professionals, deliberately inclusive. And it really did work for all of the participants/musicians, though there was little if any existing research around on the topic that suggested that it would. Every single musician involved maintained their recovery – despite the odd relapse – and they all said that the orchestra was a vital part of that.

New Note Projects, a registered charity, has gone on to expand its activities, starting a guitar group called Strummers – again in Brighton – with a musician as a regular facilitator, and establishing an immediate sense of collective responsibility and the kind of peer-to-peer group support that we saw in the Addicts’ Symphony. 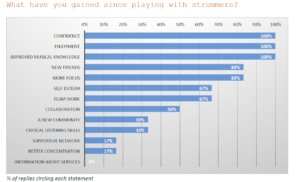 New Note Orchestra provides a structured musical programme within a supportive community. We can see how effective this can be in increasing self-esteem and boosting confidence, developing new life-skills for all participants. The inclusivity is vital too, and the orchestra is open to all tastes and styles of music. With partners, such as researchers and facilitators, we aim to further establish the New Note model as a proven means of helping people with mental health issues and challenges, enhancing their wellbeing at individual and social levels. We know that this model works for those who have been in the initiative, and with the right levels of support and commitment there is no reason why it can’t work for thousands more people. We have the will. We know the way: we need the partnerships and policies that could give sustained life to what has so far proved to be a life-changing experience and process for many whose life-chances had been diminishing day by day. 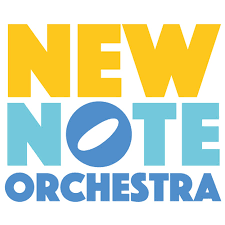