Learning is important for our progression in life. It is particularly important for young people during their transition from school to higher education, or work.

If I learn something new it will open doors for me.

Wellbeing is an important issue for schools and universities. However, little evidence is available on the effectiveness of actions and approaches designed to improve learning by addressing wellbeing.

This briefing is based on an evidence review that examines the effectiveness of approaches designed to enhance wellbeing in order to improve engagement and progression in young people’s learning.

The review focuses on interventions with 16-24 year olds, given the long-term importance of having a stable transition into adulthood (DfE, 2016; HM government, 2011, Lane, Conlon, Peycheva, Mantovani & Chan 2017).

By understanding what wellbeing approaches are effective in improving learning, policy-makers and learning providers may be better placed to challenge the wellbeing-related barriers that limit some young people’s progression.

A small evidence base shows that a range of approaches that aim to enhance learners’ wellbeing improve:

For students with low wellbeing and mental health issues, the approaches reviewed were effective in supporting young people. However, the majority of the studies used a relatively healthy sample and so more evidence is needed from studies that directly target students with poor mental health, including anxiety.

Tailored delivery for the specific needs of the target group resulted in more effective approaches. Young people engaged better with approaches when this was the case.

What type of approach is most effective?

A range of wellbeing-related approaches were used and were largely effective. However, the evidence needs to be developed before drawing any solid conclusions about what techniques are most effective and for which groups of young people.

What evidence did we find?

Three studies measured the impact of approaches on levels of participation in learning (Bullis et al, 2002; Geenen et al, 2015; Ruthig et al, 2004). These studies taught students with mental health issues or at high risk of low wellbeing to develop strategies for dealing with stress or low wellbeing, that may otherwise have led to dropout and non-participation.

These studies pointed to the importance of designing an approach with the needs of the target audience in mind.

See case study one and three for studies looking at specific approaches.

One, US-based, study, showed that young people in foster care benefitted from one-to-one support from ‘Transition Specialists’. These specialists facilitated engagement through work and education placements, co-ordinating with other support services and providing functional skill assessments and mentoring. The study (of 85 participants, and with a weaker study design) did show that participants enrolled, or remained enrolled in school, and/or completed school.

Enhancing wellbeing can increase motivation and engagement in learning, when the approach is well designed

Evidence suggests that the design of approaches is key. Studies that were sensitive to the needs of the learners and that were designed with the subject area setting where the approach was being carried out in mind, were found to have higher success rates (see figure one). Four studies measured the effect of wellbeing approaches on academic engagement: absorption or interest in learning, which is closely linked to motivation to learn (Breso et al, 2011; Gregoire et al, 2016; Ouweneel et al 2014a,b). Two other studies measured academic motivation as an outcome (Moir, 2016; Kim & Hodges-2012). 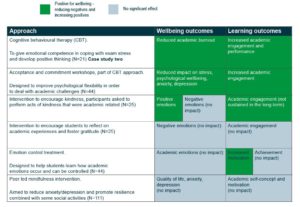 Although half of the approaches showed sustained positive effects, the evidence was not consistent. The other half of the studies showed no effects at the final follow up and identified a number of potential factors that may have contributed to the lack of effect. 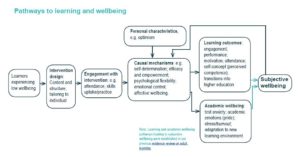 One approach designed to help students learn how academic emotions occur and can be controlled improved the intervention group’s motivation to learn, but did not translate into a change in academic emotions nor better test scores (Kim & Hodges, 2012). The lack of effect was thought to be because of the short nature of the approach, which was made up of a six-minute video designed to help students develop emotional control over positive and negative emotions and improve performance in a maths course.

Close What evidence did we find?

1. Consider the wellbeing needs and barriers being experienced by students, and consider these in the design of learning programmes. This is important for improving students’ mental health, as well as engagement, achievement and progression in learning more generally.

2. Consider how effective these are in achieving your aims. If you are already delivering approaches or learning programmes like those captured in the review how can you improve these based on the evidence? Including behavioural elements alongside cognitive strategies makes a difference in impact; tailoring mode of delivery and content to the specific wellbeing needs of the learners seems important to success.

3. The success of actions and approaches will be influenced by the extent to which participants engage with it, so thought needs to be given to how and why the target group will be motivated to participate and fitting a mode of delivery around these needs.

Beyond the averages: the relationship between higher education and wellbeing