You may also wish to Read the blog article on this document.
Home > Resources > Briefing: Neighbourhood influence on culture, arts and community engagement
April 2022 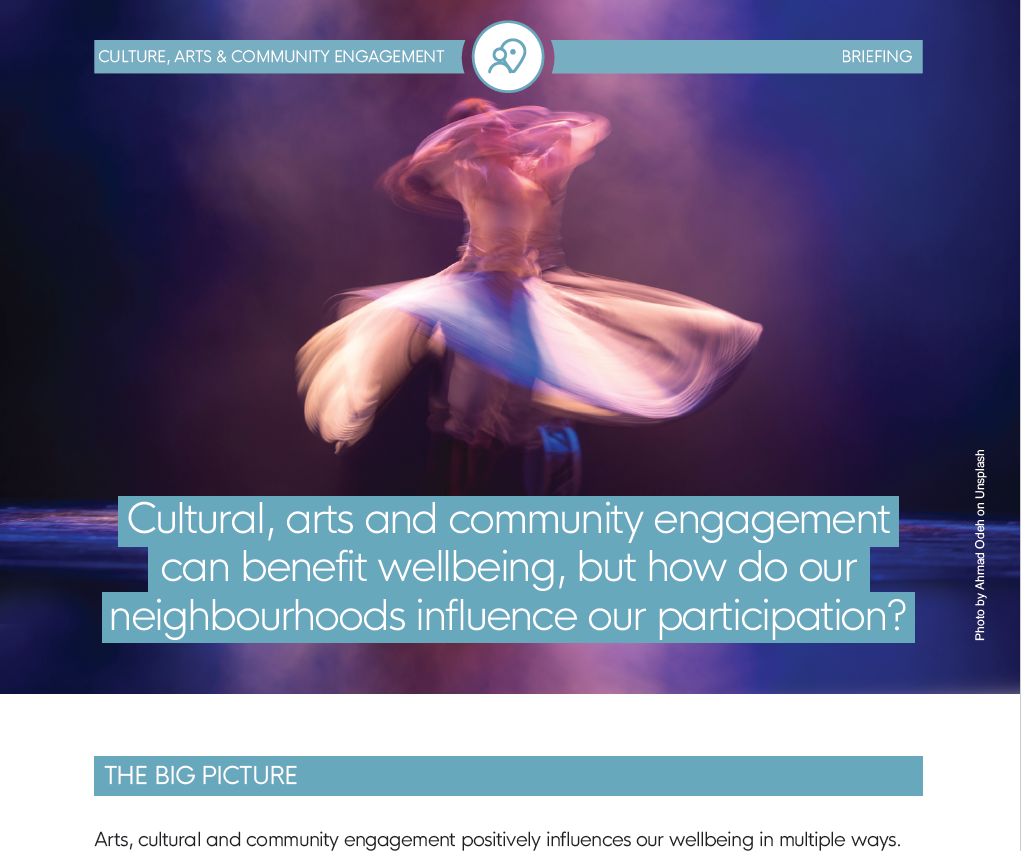 Researchers have found that the positive relationship between arts, cultural or heritage attendance and wellbeing exists regardless of where people live.

However, people living in hard-pressed communities, deprived and multicultural areas are less likely to engage than those living in wealthier, cosmopolitan or countryside areas, and this is after factoring in individual characteristics like age, gender, ethnicity, partnership status, educational level, socio-economic status, monthly income, etc.

It is possible that in deprived areas, lower engagement is a result of a combination of factors such as:

Cultural and heritage = attending or visiting museums, galleries or exhibitions; the theatre, or concerts; the cinema; festivals, fairs and events; stately homes or buildings; historical sites; landscapes of significance; libraries and archives.

How our mental health and wellbeing benefit from community engagement

Previous studies have shown that arts participation, cultural attendance and visiting museums and heritage sites can all lead to positive psychological, physiological, social and behavioural responses. The evidence indicates that participating in arts and cultural activities generally has
a positive effect on our health and wellbeing. (2) Different types of community engagement have been found to be associated with different wellbeing benefits.

Moreover, the benefits of arts participation and cultural engagement on mental distress and life satisfaction hold after controlling for variables like gender, demographic background, socio-economic characteristics, health behaviour and support from family and friends. This analysis also showed that the wellbeing benefits of arts and cultural engagement were not explained by factors such as personality, previous arts engagement, and previous mental health. However, the direction of the relationship cannot be confirmed. (3)

Similarly, the benefits of volunteering are independent of demographic characteristics (e.g. age, partnership status, long-standing impairment) and socio-economic position (e.g. education, employment status, monthly income). However, there was a cohort effect which suggests that these benefits are greater for people from older generations than for younger birth cohorts. This suggests that there might be changing social attitudes in how volunteering is portrayed, e.g. as a means to collectively improve society vs a strategy to promote individuals’ health and wellbeing, which could play a role in whether the experience of volunteering is beneficial for wellbeing. (6)

Life satisfaction was measured with a seven-point scale (1: completely unsatisfied to 7: completely satisfied).

Functioning was measured using the 12-item or 36-item Short Form Health Survey (SF-12 or SF-36) and it was used as a proxy for measuring health-related quality of life. We used 8 of the indicators including: physical functioning, role limitations due to physical health problems, bodily pain, general health, vitality, social functioning, role limitations due to emotional problems and mental health.

Close How our mental health and wellbeing benefit from community engagement

Individuals living in areas of high deprivation are at greater risk of poorer mental health, therefore researchers examined the extent to which such individuals benefited from engagement compared to those living in wealthier areas.

There is a positive relationship between cultural and heritage attendance and wellbeing that is independent of individuals’ regional locations or area deprivation. While the effects are small, it is significant that both cultural and heritage attendance are constantly associated with better wellbeing regardless of where people live. The benefits of participation can be observed even amongst those living in deprived areas. Note that this analysis did not include performing arts.

That said, some small moderation effect was found between cultural engagement and area deprivation, whereby the wellbeing benefits of cultural engagement may be greater for those living in deprived areas. As people engage more frequently, mental distress decreases and mental health functioning increases more notably for those living in the most deprived areas. Moreover, as the frequency of engagement increases, the mental health gap between least and most deprived areas narrows (Figures 1 and 2). Life satisfaction benefits do not seem to be moderated by area deprivation.

The benefits of volunteering on mental distress and mental health functioning were also found across neighbourhoods, regardless of where people live. (6) 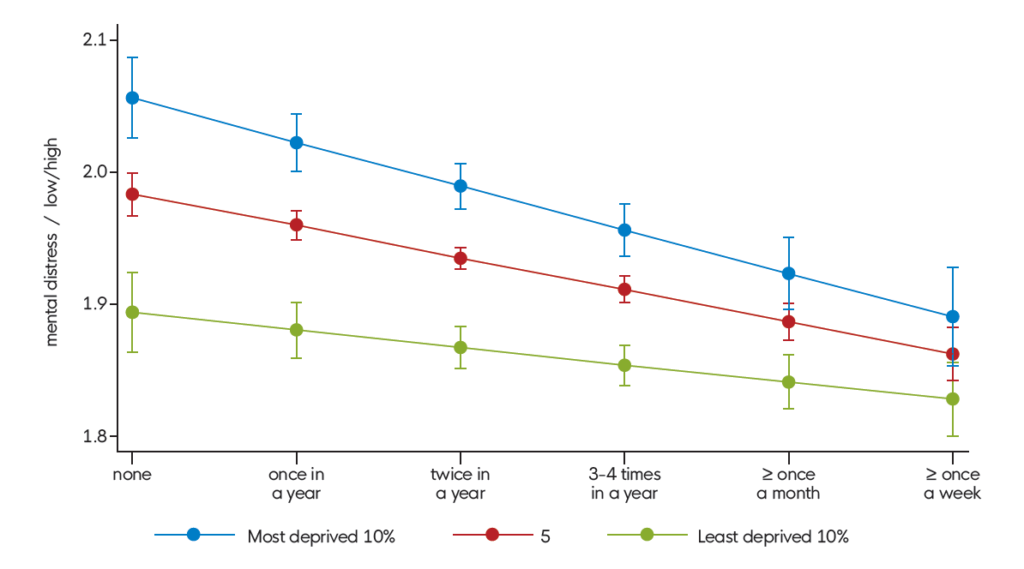 Figure 1. Association between cultural attendance and mental distress by levels of area deprivation. 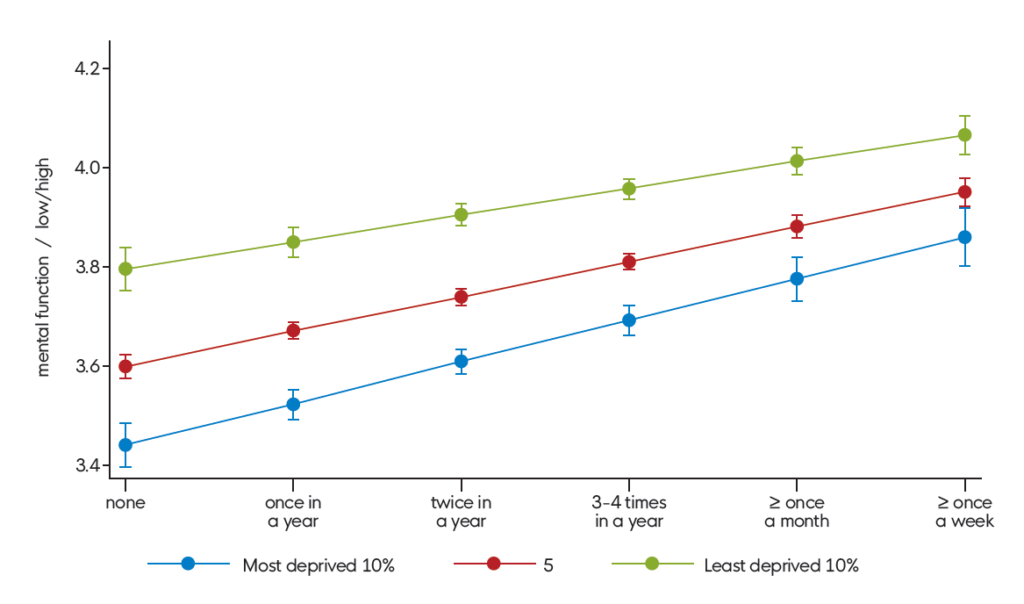 While the public, social prescribers and healthcare professionals are increasingly aware of the benefits of participating in arts and cultural activities, engagement in these activities is still unequal. Research has focused on individual-level characteristics to explain the uneven patterns of engagement. For instance, women, individuals from ethnic majorities, people with higher monetary resources and specific acquired tastes are said to be more likely to engage in the arts.

Researchers wanted to find out if engagement behaviours could be explained by geographic factors (our residential location), in addition to individual characteristics. Four geographic variables were examined:

In particular, there was more evidence for differences in participation based on level of area deprivation. For example, in England:

Where we live is important but does not always determine whether we engage. For example, it was found that people living in deprived neighbourhoods but with high socio-economic status still engaged in cultural activities (the same was not found for arts participation). However, it remains to be explored whether they engaged in the areas they lived or somewhere else.

Overall, arts and cultural access or participation rates vary depending on geographical factors such as the spatial setting where we live and the characteristics of our neighbourhood, and this holds true regardless of variation in individual variables like age and gender.

People in depraved areas engage less, regardless of their socioeconomic status (8)

We know that where individuals live can be strongly correlated with their own socioeconomic status, so researchers compared levels of engagement using propensity score matching to account only for the effect of place rather than socioeconomic position. They compared participants living in the 20% most deprived neighbourhoods with those living in the 20% least deprived neighbourhoods.

Propensity Score Matching was done by pairing the characteristics of people in the most deprived areas with those of the people in the least deprived areas so that any differences observed are explained by the level of area deprivation only and not by individual characteristics such as age, gender, ethnicity, whether respondents were living alone, marital status, whether respondents had children under 16 in the household, educational levels, occupational status, annual personal gross income, and housing tenure.

The results showed that, effectively, people living in the most deprived places are less likely to engage than those living in the least deprived places, independent of individuals’ demographic background, socioeconomic status or regional location. And it applies to all three types of activities (arts participation, cultural attendance, museums and heritage sites):

The level of deprivation was defined using the Index of Multiple Deprivation (IMD), comprising 7 domains of deprivation: income, employment, education, skills and training, health and disability, crime, barriers to housing and services, and living environment. Similar results were obtained across all 7 domains, suggesting that all these neighbourhood characteristics are associated with less engagement.

Close People in depraved areas engage less, regardless of their socioeconomic status (8)

These geographical differences in engagement behaviour could be explained by:

Social prescribing is a way to connect people to social, emotional and practical support in their communities and beyond, usually through referrals from health and social care.

The benefits of taking part in arts and cultural activities in community settings are clear, but too many people are still missing out, especially in deprived communities. It’s not enough for these activities to exist; people need to be supported to take part.

Social prescribing can help connect people to these local activities by emphasising their wellbeing benefits, and by supporting people – for example through buddying schemes – to attend for the first time. Removing barriers to engagement can benefit not just individuals with low wellbeing, but the wider community – as the mental health inequality gap narrows.

This evidence rightly highlights the difference between people lacking opportunities, and people being disinterested in taking part. Social prescribing puts a person’s context, motivations, and aspirations at the heart of personal plans, and can therefore provide tailored referrals to local activities.

This briefing summarises the findings of WELLbeing & COMMunity Engagement (WELLCOMM), an ESRC-funded project led by researchers at University College London in collaboration with the What Works Centre for Wellbeing [ES/T006994/1].

Methodologies, data sources and paper citations are detailed below.