You may also wish to Read the blog article on this document.
Home > Resources > Covid-19 and wellbeing inequalities: Housing
July 2021 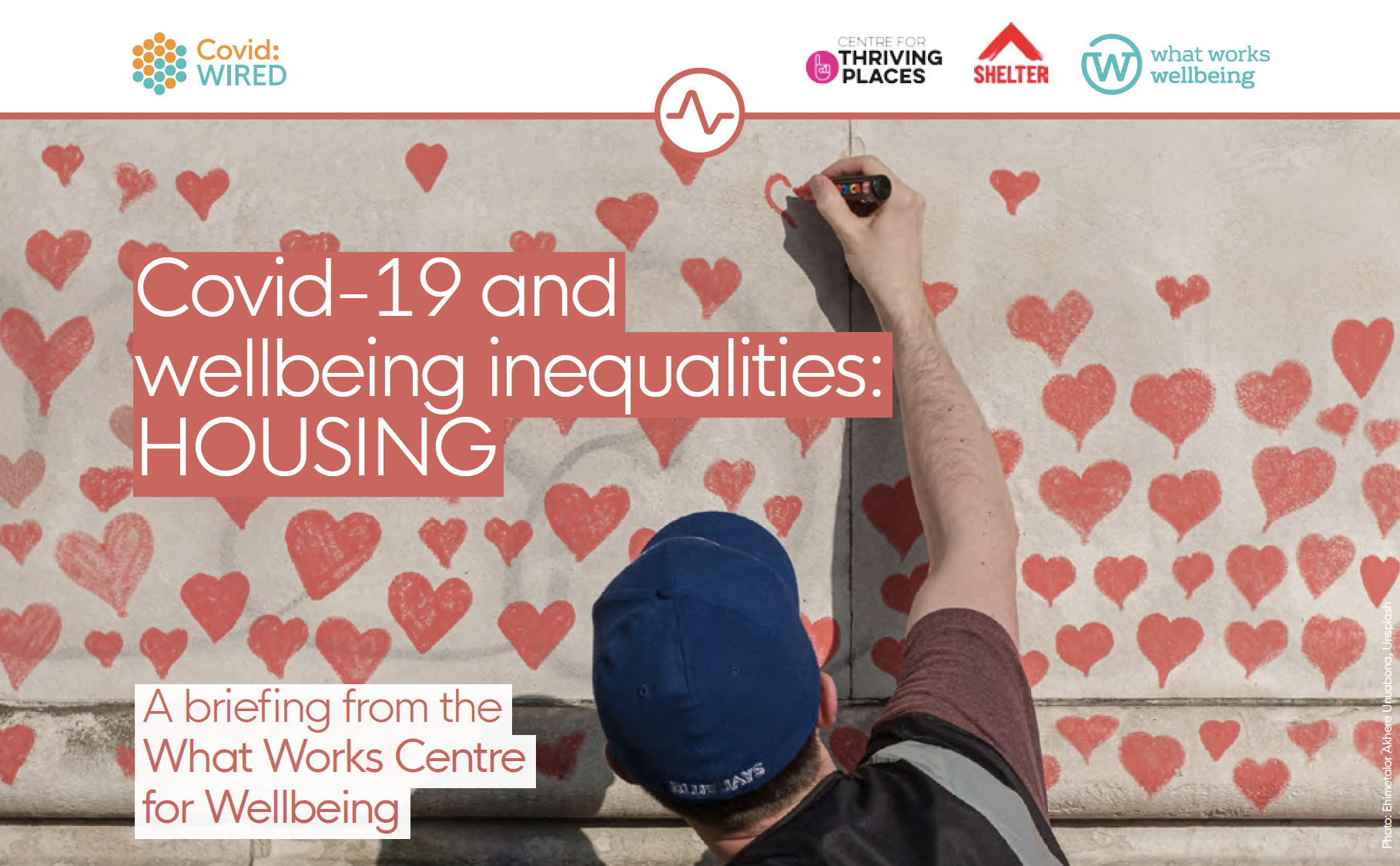 There are long-standing inequalities within the housing system: the type and quality of housing, affordability and access to amenities vary across different communities and groups.

These inequalities have a direct impact on the drivers of wellbeing, such as physical and mental health, our perceptions of the community around us and our social relationships. They also can directly impact on our overall wellbeing. The onset of the pandemic meant that existing inequalities in conditions at home were exacerbated by lockdown because more time was spent there, but also because they have affected how different people were able to respond to the lockdown, such as whether they could work from home.

Housing inequalities before the pandemic

There are long-standing inequalities in housing in the UK that existed before Covid-19 which affected the capacity of different groups to respond to lockdown and changed patterns of work and leisure.

Why these inequalities were relevant during the pandemic

Since March 23rd 2020, people have spent more time at home and therefore their immediate surroundings had a greater impact on shaping their quality of life. Housing conditions had a stronger independent effect on wellbeing in the first lockdown than before the pandemic; the wellbeing gap between renters and owners has widened over the lockdown period (controlled for income and relationship status). In addition, the composition of households affected the risk of infection from Covid-19: a panel study found the risk was determined by the number of social contacts individuals make, which increased with the number of people in the household.

During the first lockdown, many households experienced multiple types of vulnerabilities simultaneously, particularly working-age households. For example, economic vulnerabilities are more likely in working age households but will depend on the employment status of members and sectoral effects, whereas those who are retired are more likely to face health challenges and digital exclusion.

Physical health inequalities associated with housing have been exacerbated in the pandemic as poor housing and overcrowding have been linked to increased transmission of the virus. Poor housing conditions and housing composition, which are disproportionately experienced by those from ethnic minority groups, are linked with greater likelihood of catching/passing on Covid.

A literature review found that lockdowns have exacerbated health inequalities because they have required people to spend more time and carry out more activities at home. 31% of British adults reported physical or mental health problems because of poor housing conditions in lockdown. A lack of space and privacy was cited by several participants in a study in England and Wales as a barrier to staying active.

In terms of those benefiting from their surroundings, a cohort study of older people in Scotland in May/ June 2020 found that spending time in the garden was associated with greater self-reported health. This is the group that is most likely to have access to gardens.

Younger people have been more likely to endure lockdown in homes with less space, more damp, fewer gardens and/or in derelict or congested neighbourhoods than older people. One cross-sectional study of community organisations and young people in England and Wales found that home conditions during the first lockdown were often challenging for those living in low income households. In particular, young people felt trapped in overcrowded housing, with limited private space, and reduced access to normal support structures. Young people struggled with long periods indoors. Therefore the experience of existing inequalities in conditions at home were exacerbated by lockdown because more time was spent there.

Other relevant changes during the pandemic

A literature review found that, as a result of lockdown and restricted services, delays to the installation of home adaptations and more time spent in homes with physical hazards, such as inadequate lighting, uneven surfaces and structural deficiencies, increases the risk of negative health and wellbeing outcomes. These risks are heightened for older people and people with pre-existing health conditions, as they are more likely to be shielding and to live in unsuitable homes.

Changes in inequalities during the pandemic

The economic impacts of Covid-19 have exacerbated housing insecurity for many, despite temporary policy interventions, and wellbeing among renters is particularly affected. Renters appear to have experienced lower wellbeing in the pandemic than owners, although all tenures are negatively affected by financial insecurity due to the pandemic.

Other inequalities based on housing status have also emerged:

Although there were increases in demand for services for homeless people, and a continuing flow of new rough sleepers throughout the pandemic, there was increased access to emergency support at the start of the pandemic. New ways to support people facing multiple disadvantages were quickly implemented across the country, including emergency accommodation for homeless people and more autonomy and flexibility for workers. A House of Commons Library Research Briefing found that in April 2020, over 90% of England’s known rough sleepers had been offered accommodation. Evidence gathered through the first lockdown from support services found that the movement of homeless people into emergency accommodation with support brought short term benefits, for example facilitating self isolation and providing clinical support and treatment for substance use issues, and a foundation for recovery. Providers reported that it enabled support to be offered to many people who had previously been hard to reach, helping them to move on from rough sleeping. Evidence gathered from English local authorities found that policies such as furlough and benefit increases helped to prevent or minimise homelessness.

A review of the approaches to homelessness that were adopted early in the pandemic found they brought many benefits and were more successful than previous UK approaches in terms of supporting the wellbeing of homeless and vulnerably-housed people and reducing the spread of Covid-19. The review also found that in the first lockdown, there were fewer people becoming homeless due to the end of tenancies, institutional discharge and those as a result of relationship breakdown and domestic violence remained static.

The evictions moratorium is credited with stemming the flow of those facing homelessness, however this ceased at the end of May 2021. Despite the positive results of the Everyone In campaign, authorities reported that forms of homelessness that had been hidden surfaced during the pandemic, such as those who were “sofa-surfing or living in all sorts of situations that were unsuitable, overcrowded”.

The experiences of people who face multiple disadvantages over the longer course of the pandemic was less positive. At the start of the pandemic, evidence from the Homelessness Monitor found gaps in the homelessness response in different areas/ circumstances and lack of support/health services suggests the potential for significant harm to people who are already experiencing vast inequalities. By the winter of 2020/21, homeless people reported anxiety and uncertainty over the future of their emergency accommodation and difficulty accessing health services and the technology to book Covid tests. In addition, economic and other impacts of the pandemic and associated restrictions may have contributed to an ongoing trend of people becoming homeless and/or seeking temporary accommodation.

In addition, the impact of the wellbeing of staff working within the homelessness sector was negative: evidence collected from frontline homelessness support staff during the pandemic showed they experienced fear of contracting the virus at work, a lack of PPE at the start of the pandemic, and lack of the usual support for vicarious trauma.

Why do these findings matter for wellbeing?

The onset of the pandemic brought additional challenges to those facing housing inequalities: the need for space to quarantine safely from others, spend long periods of time inside, rest, work and exercise was not met by all forms of accommodation.

The effect was particularly acute for those on low incomes, from ethnic minorities and the young, including where those groups intersect. Housing conditions therefore not only had a direct impact on wellbeing but also drivers such as health and employment.

Beyond the initial lockdown, longer term inequalities are prevailing: those with less income and capital (in the form of housing) are coming out of the pandemic in a less stable economic position. Renters are particularly vulnerable to increased debts and reduced savings. The policy responses that were successful in preventing homelessness and evictions in 2020 have tailed off or stopped which will directly impact on many people’s housing security and, as detailed above, changes to support or ambiguity over future support affects people’s wellbeing.

What the emerging evidence has shown is the immediate and direct impacts of our housing on our ability to respond to the pandemic, but also the way in which longer-term inequalities leave some groups even more vulnerable as we start to move out of the pandemic, with its associated challenges and support systems. Monitoring both the tangible effects of housing on the drivers of wellbeing as well as its effects on subjective wellbeing will help to craft and evaluate policy and practice responses. 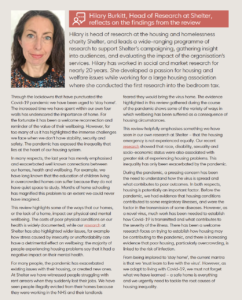 This briefing was prepared by Rosie Maguire, Centre for Thriving Places, using the Covid:WIRED dashboard.