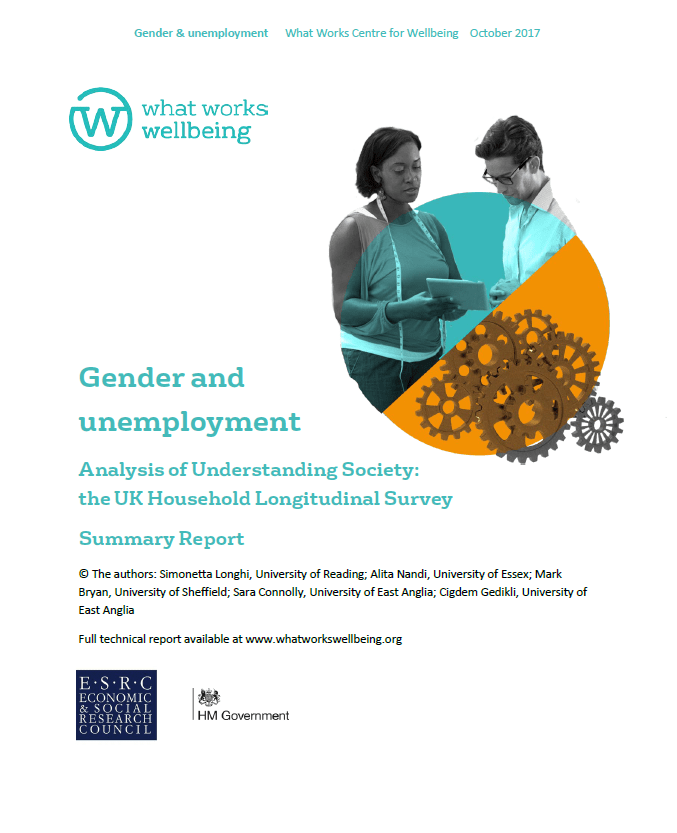 How does unemployment impact men and women’s wellbeing?

Existing research provides clear evidence that the effect of unemployment goes well beyond a loss in earnings (Winkelmann and Winkelmann, 1998), it has a detrimental impact on individuals’ happiness and their satisfaction with life (see, for example, Binder and Coad, 2015 for Britain; Blanchflower and Oswald, 2004 for the US; Ferreira et al., 2016 for southern Europe; Kassenboehmer and Haisken-DeNew, 2009 for Germany; Milner, 2016 for Australia; Powdthavee, 2007 for South Africa; Urbanos-Garrido and Lopez-Valcarcel, 2015 for Spain). Although people have a tendency to adapt to important life events such as marriage, divorce, birth of a child etc., the negative effect of unemployment on life satisfaction persists (Clark et al., 2008; Clark and Georgellis, 2013). Life satisfaction drops upon unemployment and it never gets back to the pre-unemployment levels, even when returning to employment. That is, people never fully adapt to unemployment (Clark et al., 2001; Clark et al., 2008; Hahn et al., 2015; Lucas et al., 2004; Oesch and Lipps, 2013).

On average, women’s life satisfaction is less affected by unemployment compared to men.

Men show a greater drop in life satisfaction when they become unemployed. For full evidence on this, see our Unemployment, (re)employment and wellbeing briefing.

But this average gap conceals a range of different experiences. Not all women suffer less than men when they lose their job. This analysis explains some of the differences, showing how values and attitudes influence the experience of job loss.

Losing my job has raised doubts with me, shaken my confidence.

NHS staff wellbeing: the financial impact and actions for improvement