The #BeeWell project is a £2m collaboration between the University of Manchester, the Greater Manchester Combined Authority and the Anna Freud Centre, and the What Works Centre for Wellbeing is a long term advisor. Each year, the programme will measure young people’s wellbeing and aims to bring about positive change in local communities. In this blog, Nancy Hey, our executive director, takes us through the findings of the first #BeeWell survey.

What do we know about young people’s wellbeing? Through the #BeeWell project, almost 40,000 young people in Year 8 and Year 10, from 93% of secondary schools across Greater Manchester, have taken part in the largest survey of its kind. Pupils in non-mainstream schools were able to complete a short version of the survey. A symbol-based version was also created for young people with profound and multiple learning disabilities.

The results have been made available to all the schools and overview summaries of the findings shared by the #BeeWell team. Crucially, the data is being made available not just to schools, but to all 66 neighbourhoods and families too through a pioneering interactive dashboard.

What do we know about young people’s wellbeing?

In the UK, we measure the wellbeing of adults regularly, consistently and at scale. When it comes to young people’s wellbeing, our Children’s National Statistics are robust, thanks to pioneering work from The Children’s Society, but smaller-scale.

The Office for National Statistics has a rigorous children’s wellbeing framework, and a good number of organisations are doing great work to measure wellbeing in schools.

However, the data is still patchwork and could easily be incorporated into national data sets and used more effectively.

Wellbeing measures are Mission 8 of the government’s ‘Levelling Up’ white paper, and the overall outcome of all 12 Missions. We know that young people’s wellbeing can be predictive of adult mental health up to 8 years later. Therefore, if we are to improve outcomes across the nation by 2030, we need to measure, monitor and act on supporting children’s wellbeing now.

What did #BeeWell measure and why?

The measures used by #BeeWell build on the pioneering work of many organisations, including the National Lottery funded HeadStart programme.

The What Works Centre for Wellbeing worked with the Children’s Society on the conceptual underpinning of the drivers and domains of wellbeing. We have advised on the #BeeWell project in a number of ways since its inception, including on the conceptual framework of subjective wellbeing measurement, and on the domains and drivers of wellbeing based on our reviews of the wellbeing literature and analysis of ONS subjective wellbeing data. The #BeeWell team also consulted with young people themselves to identify the things that mattered most to them. These were:

The areas of wellbeing that were found to be most important to young people were: 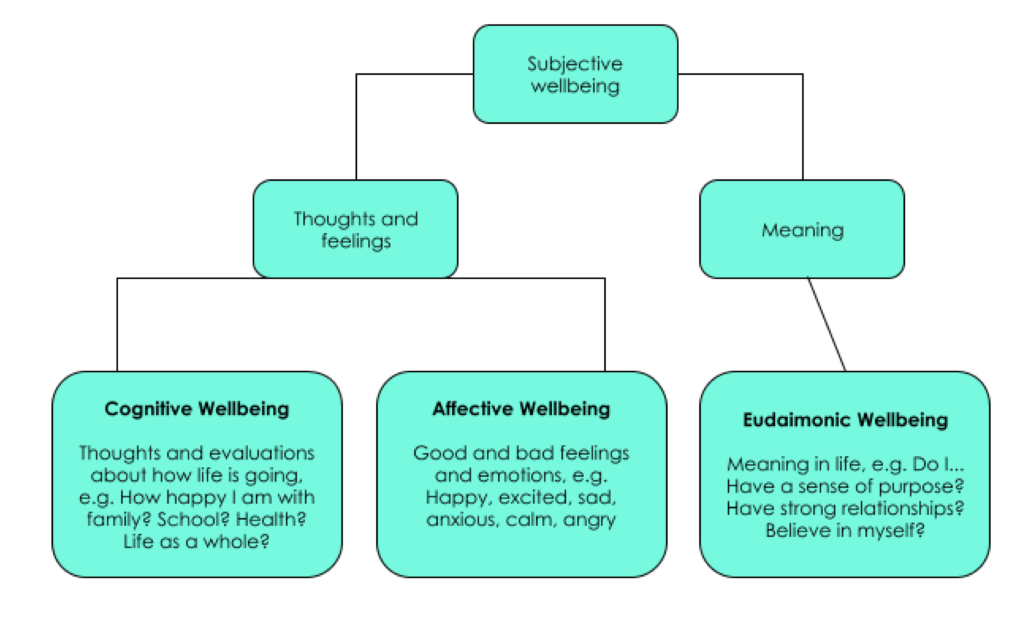 The things that were found to impact, drive and be most important to the wellbeing of young people were:

What have we learned about young people’s wellbeing?

The #BeeWell team is publishing three sets of findings from the survey:

The findings provide reasons to be hopeful for the future. However, they also highlight important wellbeing inequalities that call for further action.

Here’s a look at some of the key findings:

What do the findings tell us about wellbeing inequalities?

What’s next? Turning evidence into action.

The #BeeWell project is a 100+ organisation cross-sector coalition, and the findings are already informing activity across Greater Manchester.

A new social prescribing pilot in five neighbourhoods has launched in response to the data, where young people will have access to £20,000 commissioning pots to spend on mental health and wellbeing activities in their local area. A youth-led radio show will see young artists exploring the key themes that have emerged from the data. The findings will also inform mental health commissioning led by LGBTQ+ people from the GM Health & Social Care partnership.

Action to increase physical activity and sport will include:

Thank you to schools and young people in Greater Manchester, the #BeeWell partners and coalition for your pioneering action.

Nancy Hey is a global leader in the field of wellbeing. Prior to setting up the Centre, she worked in the UK Civil Service in nine departments as a policy professional and coach, delivering cross UK Government policies including on constitutional reform.

She has worked with the UK’s top civil servants to introduce wellbeing into public policy and to establish the professional policy community in the UK. She has degrees in law and in coaching and development, specialising in emotions, and is a passionate advocate for learning systems.

She holds a wide range of advisory roles across the UK and globally to bring evidence into decision making and to fill evidence gaps including on Public Health England’s Every Mind Matters Expert Advisory Group, Well Schools, Pro Bono Economics, Loneliness & Social Isolation Research Network and Early Intervention Foundation Knowledge Mobilisation.  She is a Fellow of the Royal Society of Arts,  a Fellow of Institute of Coaching, McLean Hospital, a Harvard Medical School Affiliate and a Fellow of the Zinc Academy.

Formal publications and contributions include

Children and young people’s subjective wellbeing: how to measure it more consistently?

What has wellbeing got to do with children and young people?

Measuring wellbeing in schools and colleges