Home > Blog > How are we feeling as a nation one year on from the EU referendum?

How are we feeling as a nation one year on from the EU referendum?

Since 2011, we have asked personal wellbeing questions to adults in the UK.  This provides insight into people’s feelings about their lives and surroundings which economic statistics (such as GDP) alone do not provide. It is hoped such information supports better decision making among policy-makers, individuals, communities, businesses and civil society.

Today’s figures, the first to be based on a full year of data since the EU referendum, show small increases in how people in the UK rate their life satisfaction, happiness and feelings that the things they do in life are worthwhile. The improvements were driven by England – the only country where quality of life ratings got better over the last year.

The average (mean) ratings across the four measures of personal well-being in the year ending June 2017 were:

Between the years ending June 2016 and 2017, there have been statistically significant improvements in average ratings of life satisfaction, feeling the things we do in life are worthwhile and happiness for the UK overall. There was no change in average ratings of anxiety. To give some broader context, the figure below shows the average life satisfaction, worthwhile and happiness ratings, year ending March 2012 to year ending June 2017 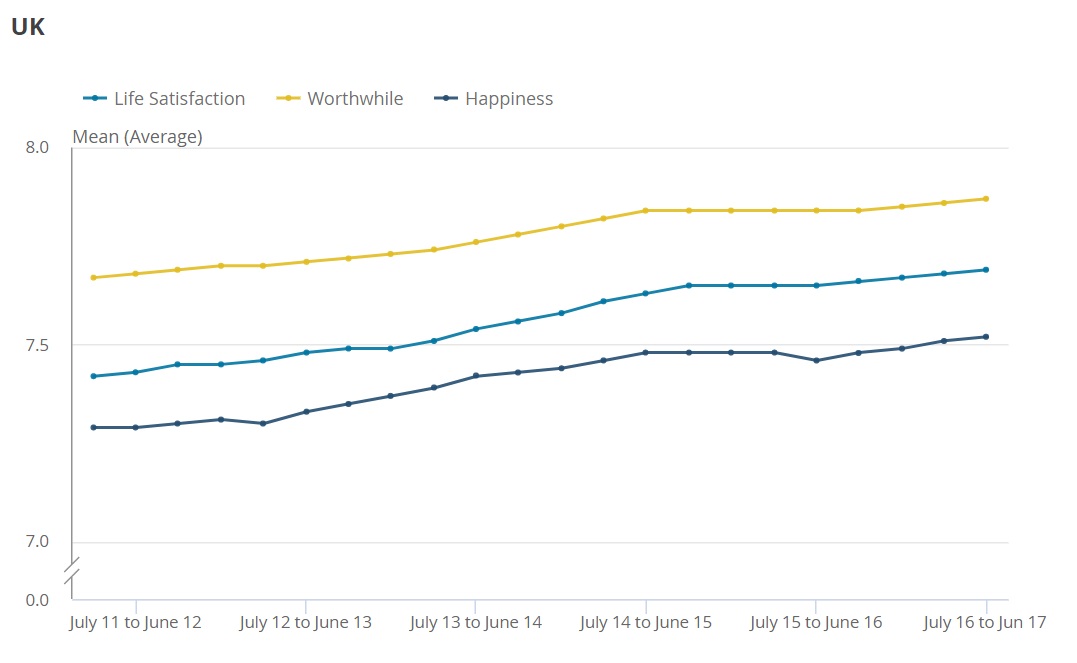 What’s important about the data?

Over the year that this publication covers, various situations of uncertainty, not least in political terms, have unfolded in the UK. For example, alongside the appointment of a new prime minister, the 12-month period covered by this release also allows the first opportunity to consider how personal well-being has fared in the year following the UK’s vote to leave the European Union (EU). Ipsos MORI’s Political Monitor asked people in the UK “Now that Britain has voted to leave the EU, to what extent do you think it will be better or worse for your own standard of living, or will it make no difference?” March 2017 saw 40% report that it would make no difference, which is up from 24% in October 2016, possibly implying that as time goes on people are becoming more relaxed about the implications of Brexit. Another thing to note is that although Article 50 has been triggered, we have not yet left the EU and hence the implications on the daily lives of people in the UK remain to be seen.

Some of the increases in wellbeing ratings may be explained through the improvement in certain economic indicators within the UK. For example, the employment rate is at its highest level since comparable records began in 1971 and the unemployment rate is at its joint lowest since 1975. Additionally, there were improvements in both gross domestic product (GDP) per head and net national disposable income (NNDI) per head. Despite these improvements, real household disposable income (RHDI) per head fell for the fourth quarter in a row and, for the first time in two years, consumers reported a worsening perception of their own financial situation in April to June 2017.

In addition to the political uncertainties mentioned previously, the UK has witnessed a number of other incidents over the year, including several terror attacks. Considering this, it may be surprising that levels of personal well-being are increasing. However, it is important to note these figures are only reported at a country and national level, and are presented over the year. It is therefore possible that any sudden or individual change in personal well-being may not be seen in the data.

What’s coming up next?

ONS is looking at what causes people to report low and high measures of personal wellbeing by identifying groups of individuals that share similar characteristics and looking at the factors that determine their reported wellbeing. We are also hoping to release some analysis towards the end of the year looking at how personal wellbeing ratings compare between UK, EU and non-EU nationals. We will also be publishing analysis looking at children’s engagement with the environment before the end of the year.

Are the measures of personal wellbeing all there is?

Not at all – there are actually 43 national wellbeing indicators, which include our health, natural environment, personal finances and crime. Our interactive dashboard which was recently updated with revised and new data shows trends for each measure alongside an assessment of change over time.