You may also wish to Read the blog article on this document.
Home > Resources > The impact of the pandemic on subjective wellbeing inequalities
July 2021

The impact of the pandemic on subjective wellbeing inequalities 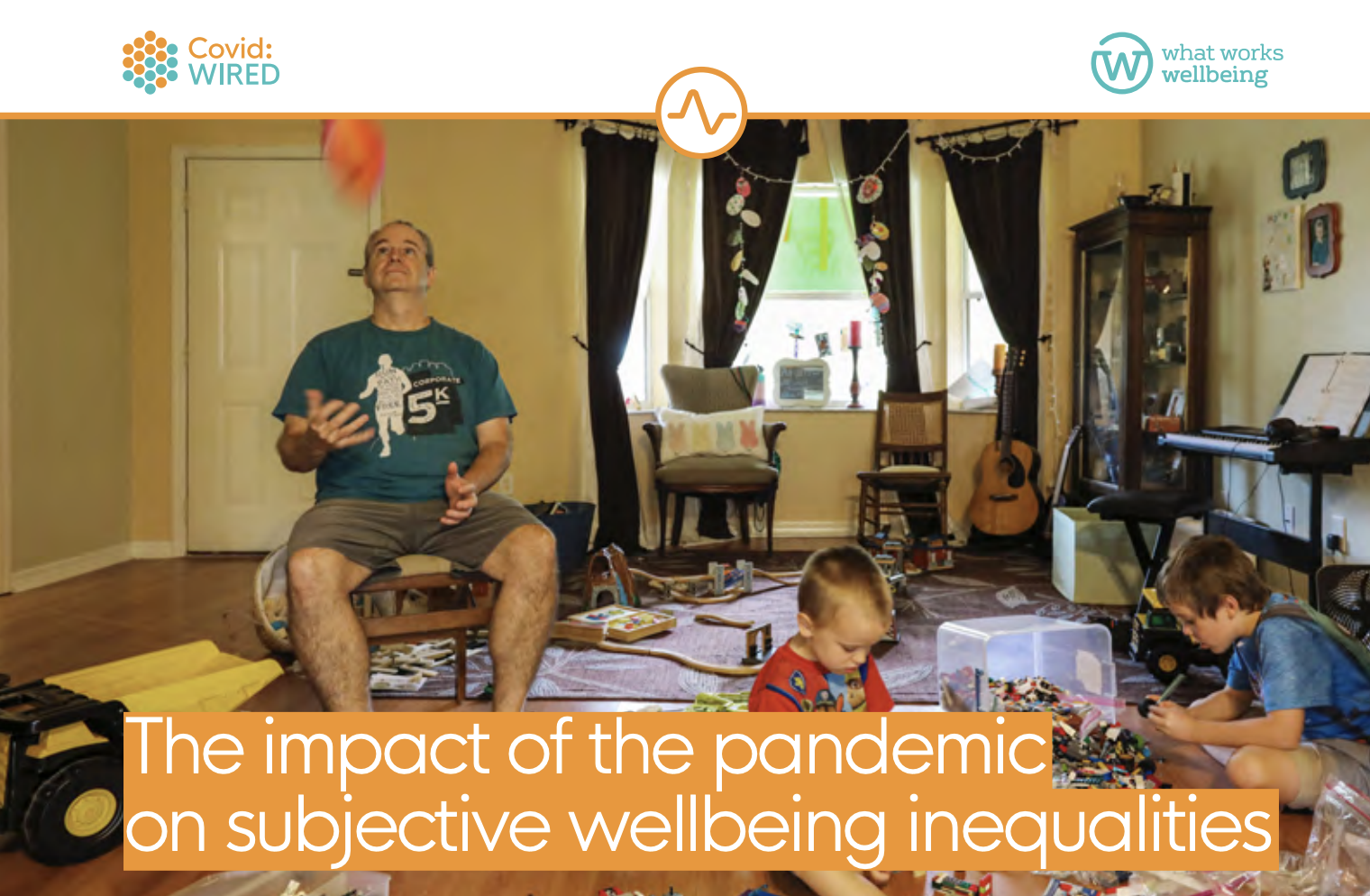 The impact of the pandemic on subjective wellbeing inequalities

There is no doubt that the Covid-19 pandemic’s most visceral impact, serious illness and death, has been felt unequally by the UK population, and especially by those already disadvantaged.

At the time of writing, the age-standardised death rate in the most deprived decile of communities in England was 300 per 100,000. For the least deprived decile, it was 122. Ethnic minorities and frontline workers have also been more likely to suffer seriously from the illness. Although there does appear to be a tendency for the pandemic’s broader health, economic, social and environmental impacts to also have increased and entrenched existing inequalities, the picture is not entirely uniform. For example, while people with lower incomes were more likely to be furloughed or have their hours reduced during the pandemic, the overall effect of the pandemic and associated welfare measures has been to reduce income inequality in the UK.

Subjective Wellbeing aggregates most of these impacts into an overall effect (aside from death). Subjective wellbeing is affected by some of the more tangible direct impacts of the pandemic, such as income or employment losses, and illness, but also some of the more intangible social and psychological impacts such as loneliness, anxiety and loss of sense of purpose. 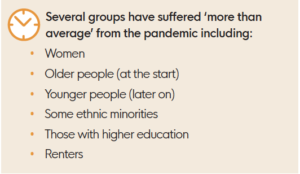 It has been a difficult 18 months for everyone to adjust to, but by looking at inequalities in the change in subjective wellbeing, we can identify which societal groups have been hardest hit in this overall sense. This is important for four reasons:

Close The impact of the pandemic on subjective wellbeing inequalities

The Covid Wellbeing Inequalities Research Evidence Dashboard (Covid-WIRED) includes findings from 25 studies that have reported inequalities in subjective (or self-reported) wellbeing. These studies have reported on inequalities in terms of gender, age, ethnicity and education level, amongst other factors. Inequalities rose between some groups but fell between others, highlighting the importance of taking a detailed and disaggregated look at how people are doing in the UK and what is driving changes in subjective wellbeing.

Four sources have been particularly important in tracking changes in subjective wellbeing during the pandemic. Perhaps the most authoritative is the ONS’s Annual Population Survey (APS), which has been collecting data on subjective wellbeing since 2011. Around 140,000 respondents report subjective wellbeing each year, providing data which allows robust fine-tuned comparisons between different demographic groups. However the turnaround between data collection and reporting is not as timely as some other surveys, with the latest analysis to date conducted on data up until September 2020.

Given the need for more rapid data collection, the ONS also conducts the more regular Opinion and Lifestyles Survey. Originally a monthly survey, the frequency was increased to weekly at the beginning of the pandemic to respond to the rapidly changing situation. The sample size is much smaller than for the APS (4,000 to 4,500 per wave) , but data is currently reported within a week of data collection and has included all 4 of the ONS’ personal wellbeing questions.

Another survey which has collected data on subjective wellbeing since the beginning of the Covid-19 pandemic is the UCL Covid-19 Social Study. Surveys have been conducted weekly since 21st March 2020, just before the first lockdown in the UK was announced. The sample size is impressive (around 17,000 per week), but the sample is self- selecting meaning that its representativeness for the UK population as a whole cannot be guaranteed. Furthermore, whilst it allows one to study in detail the evolution of wellbeing and other variables during the pandemic, it does not permit any analysis of changes as a result of the pandemic, because there was no pre-pandemic benchmark.

Of course, there are other surveys that have collected data on wellbeing in the UK since the pandemic, including Yougov’s Great Britain Mood Tracker. Some of these will be referred to in this summary as well.

Overall impact of the pandemic on subjective wellbeing 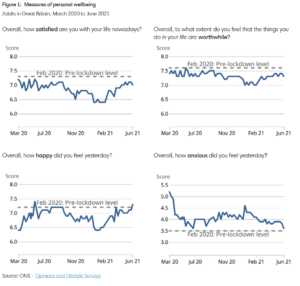 In general, based on the Annual Population Survey, subjective wellbeing fell substantially at the onset of the pandemic. For example, 27.6% of respondents reported low or medium happiness in the quarter April to June 2020, compared to only 23.4% in the same period in 2019. Meanwhile the percentage reporting high or medium levels of anxiety increased from 36.8% to 43.8%. Wellbeing researchers have noted that measures of emotional wellbeing have responded more dramatically to the situation than more evaluative measures of wellbeing like life satisfaction.

The APS and the OPN show that wellbeing has recovered since the onset of the pandemic, and has tended to reflect the ups and downs of the situation in the UK. But the latest Opinions and Lifestyle Survey data at the time of the writing (data up to 6th June 2021) shows that, whilst happiness has now inched above pre-pandemic levels, life satisfaction and sense of purpose remain below pre-pandemic levels and anxiety levels are still higher. In other words, despite most restrictions in the UK having been lifted and over 50% of the total adult population being fully vaccinated, subjective wellbeing has still not fully recovered.

Close Overall impact of the pandemic on subjective wellbeing

This summary will look at inequalities based on gender, age, ethnicity and socio-economic status (including education and income), before considering some other factors that have emerged out of the database.

Overall, it’s clear that the pandemic has had a larger impact on the subjective wellbeing of females, rather than males. Is this a change to wellbeing inequality? It depends on the measures used and what is controlled for.

A mixed methods study helps explain why women’s wellbeing has suffered more, and points to additional childcare and home-schooling responsibilities.

Meanwhile two studies looked at differences between boys and girls. Although one early study found that boys were more affected by lockdown than girls, a later one reported that girls had more anxiety about going back to school after the long break in September 2020.

Early results on the impacts of the pandemic and lockdown on subjective wellbeing suggested that older people were taking the brunt of the hit. Using data from YouGov’s mood tracker, a study by the University of Cambridge found that, up until June 2020, people 65 and over suffered a greater loss of wellbeing than younger age groups.

However, more recent analysis suggests that the picture is more complex. Using data from the APS up until September 2020, analyses by the What Works Centre for Wellbeing indicate that, whilst the age group 65-74 were indeed harder hit than other age groups, the age group 75-84 were less hard hit in terms of life satisfaction, although they showed the hardest hit in their sense of purpose. Meanwhile, young people aged 20-34 were also amongst the hardest hit by the pandemic especially as the pandemic progressed.

Given this change over time, and also an apparent increase in the gap between the wellbeing of older people (60+) and young people (18-29) in the Covid-19 Social Study since January 2021, one might expect that the pandemic may have originally affected the wellbeing of older people more, but that the evolution of the pandemic and lockdowns lead to greater impacts on young people in the long-term. However, we have not found a robust analysis of this evolution using representative samples such as the OPN or the APS.

Two studies using the APS have found that the pandemic has affected the wellbeing of some ethnic minorities more than white people – an early study in May 2020 conducted by Simetrica-Jacobs and a more recent study conducted by the What Works Centre for Wellbeing using data up until September 2020. However the latter only found a consistently larger negative effect across the subjective wellbeing measures for Pakistanis.

The previously mentioned study conducted by Cambridge University in July 2020 highlighted that people in managerial or professional jobs suffered larger subjective wellbeing losses as a result of the pandemic than other groups. They speculate that this may be because higher status individuals may have perceived they had more to lose as a result of the pandemic. For example, restrictions on travel and consumption would have affected them more than people with lower incomes. There were also many who never worked from home and so were less affected by the transition to home working.

Forthcoming research by the What Works Centre for Wellbeing, using APS data up until September 2020 confirms this pattern, finding that the greatest wellbeing losses are for those with higher education levels. Meanwhile, the pattern for income is more mixed. The biggest negative effect of the pandemic on subjective wellbeing was for the top income quintile, but the effect on the second income quintile was smaller than for lower income groups. As such, there was no linear relationship between income and the effect of Covid.

Conversely, analysis of Understanding Society by the Resolution Foundation, has shown that whether you rent or own your home, is a more significant predictor of wellbeing during the pandemic than prior to the pandemic, with the gap between renters who have lower subjective wellbeing and homeowners who are relatively happier, increasing. This makes sense, given that housing conditions are often better for homeowners, and that most people have spent more time at home during the pandemic.

New data is still coming in, particularly from the period of the second lockdown in Winter 2020/21. This data may reveal new inequalities emerging. But, in the meantime, the evidence suggests that several groups have suffered ‘more than average’ from the pandemic including:

For those groups who were already disadvantaged (e.g. ethnic minorities and renters) and where therefore these impacts imply growing inequalities, this data therefore argues in favour of doubling-down on providing targeted support.

In other cases, for example for young people and those with higher education, the implications are more subtle. It would be valuable to better understand why wellbeing has fallen more for some groups than others and where the pandemic has introduced new vulnerabilities.

This dashboard gathers data on the different domains and drivers of wellbeing that have been impacted by the pandemic. The database of studies identifies what aspects of life have been affected, delving underneath the overarching subjective wellbeing questions, as well as which individuals have been most impacted by these changes. You can search this database by wellbeing domain, or by group characteristics, s ch as gender or ethnicity, to get a picture of what has contributed to the change in wellbeing inequalities in the UK.

This briefing was prepared by Saamah Abdallah with Sam Wren-Lewis and Rosie Maguire, Centre for Thriving Places, using the Covid:WIRED dashboard.